Salzburg is the capital of the Land of the same name (Salzburgerland). The city has approximately 150,000 inhabitants and thus has a place in the top four largest cities in the country. The city lies on the Salzach River, near the border with Germany. Salzburg is especially famous as the birthplace of Mozart and organizes the Salzburger Festspiele in summer. 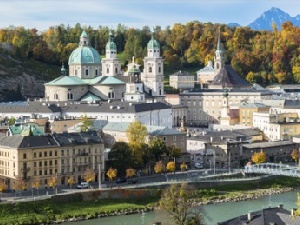 The much visited city center as a whole is on the UNESCO World Heritage List. It is dominated by baroque buildings, including the cathedral, and by the fortress Hohensalzburg, a medieval fortress on a hill, 120 meters above the city. Salzburg has been the capital of an archdiocese since the end of the eighth century, the influence of which extended far into Bavaria in Germany and Austria.

Salzburg can be reached by car via the Bundesautobahn A8 from Munich. In the city itself there is a trolley bus. Salzburg has its own airport and there are good, fast train connections. Source: Wikipedia.

The Old Market is located right in the center of Salzburg. For many centuries this market square has been the commercial center of the city. Many parties in the city are held on this square.